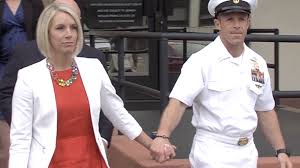 The U.S. Naval force said Thursday that it will continue with a meeting to consider the removal of Special Operations Chief Eddie Gallagher from the Navy SEALs, in spite of their help from President Trump.

Gallagher and three directing officials were educated regarding the authoritative survey board hearing, set for Dec. 2, on Wednesday.

“The Navy will NOT be taking away Warfighter and Navy Seal Eddie Gallagher’s Trident Pin,” said Trump in a tweet earlier Thursday. “This case was handled very badly from the beginning. Get back to business!”

The Trident Pin is an image of participation in the SEALs.

In July, Gallagher was vindicated of killing an injured Islamic State activist in Iraq in 2017, yet they was sentenced on the single accuse of presenting of the body of the dead detainee. A week ago Trump reestablished Gallagher’s position after they had been downgraded to unimportant official five star. Be that as it may, the president didn’t exonerate Gallagher for their offense.

“The Navy follows the lawful orders of the President. We will do so in case of an order to stop the administrative review of SOC Gallagher’s professional qualification. We are aware of the President’s tweet and we are awaiting further guidance.”

The White House didn’t react to a NPR demand for input on the tweet.

Gallagher’s legal counselors state Navy metal is trying to oust their from the SEALs in counter for Trump’s inversion of their downgrade. They recorded a grievance with the Navy Inspector General asserting that Naval Special Warfare Commander Rear Adm. Collin Green is challenging the president.

“How can Admiral Green credibly preach about preserving good order and discipline while publicly flouting the orders of the commander in chief?” Gallagher’s lawyer Timothy Parlatore said as cited by the Associated Press.

On the off chance that an audit board choice conflicts with Gallagher, they would then be able to engage the Navy’s Personnel Command.