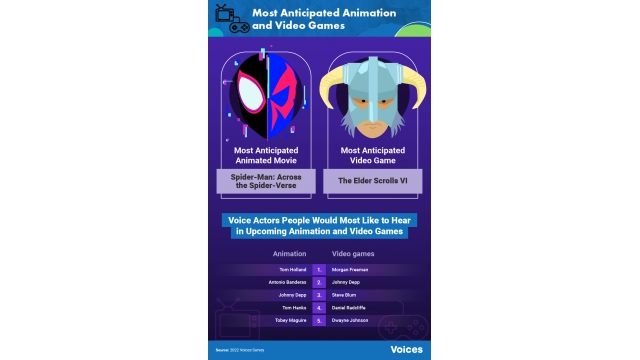 Yogi Bear, though not even in the top 3 for Millenials or Gen Z, has been found the most recognizable cartoon character voice by a majority of American participants asked to listen to sound clips, and attempt to recognize the voices of popular cartoon characters. According to a new report launched by Voices, 55% of participants recognized the voice of Yogi Bear, while only 36% recognized the voice of SpongeBob SquarePants.

More information about the Voices marketplace and the most recognizable voice actors from cartoons and video games can be found at https://www.voices.com/company/press/reports/whose-voice-is-that

The report breaks down the percentage of participants that recognized many popular voices from cartoons and animated films, including Shaggy from Scooby-Doo, Mickey Mouse, Shrek, and Charlie Brown. It also lists the emotions participants most commonly associated with popular voices, such as showing that Bugs Bunny is considered the funniest voice, while Simba from the Lion King is thought to be the coolest.

Voices also asked participants to listen to sound clips of voice over actors from video games, while ensuring none of the clips included any catchphrases or slogans. It found the most recognizable voice actor for video games is Ashley Johnson, the voice of Ellie Williams from ‘The Last Of Us’ franchise.

When asked to describe which emotions were associated with video game voices, participants responded that while Sonic the Hedgehog is the most friendly voice, and Mario the funniest, the Joker is the most annoying.

The report concludes with an exploration of the voice actors participants would most like to hear in upcoming productions, finding Tom Holland and Antonio Banderas in the lead for animated films, and Morgan Freeman topping the list for future video games.

Voices is the world’s largest marketplace for voice over actors and audio production services, with over 2 million members and over 15 years of experience connecting voice actors with producers.

More information about the most recognizable voice actors, and details about the Voices marketplace, can be found at https://www.voices.com/company/press/reports/whose-voice-is-that